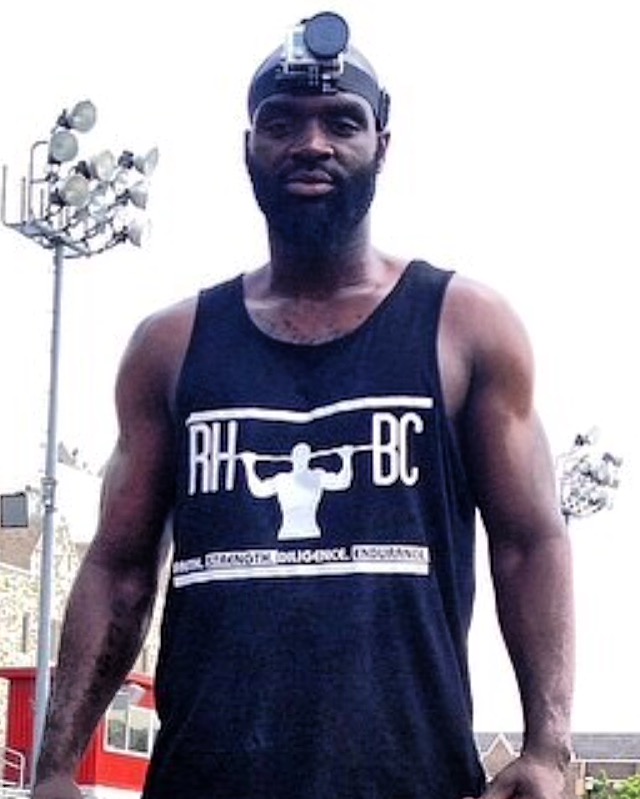 CEO/Founder of RHBC Fitness, Terrell (Rell) Harris was born February 1984 in Philadelphia, PA. When asked to describe his childhood he recaps moments highlighting following a traditional sports schedule winter it was basketball, spring it was baseball and summer/fall it was football.  Reflecting on the lessons that he applies into adulthood today RHBC Fitness founder speaks of those taught by his father who was and still is a hardworking man who taught him that nothing will be given to you!! He also cites his father’s work ethic as the reason why he works hard to provide for himself and his family.

Aside from his father, Fitness Guru CT Fletcher as a major influence as to him taking the fitness and healthy lifestyle more serious over the past few years and the creation of RHBC Fitness.

The passion he showed in his videos motivated me from thousands of miles away to become obsessed with working towards the body I wanted. (-Terrell Harris on CT Fletcher)

With a Bachelor’s degree in Hotel, Restaurant, Management from the University of Maryland Eastern Shore the founder of RHBC Fitness quickly landed a job in the hotel industry which required a lot of standing. However, after shifting over to a desk job, he felt this would be an awesome transition because he didn't have to stand up as much! Not having to stand and walk around all day seemed to be ideal until the cons set in. Now sitting behind a desk all day with his new found best friend, a snack drawer, that healthy and fitness childhood would soon become a memory. That wasn't the only problem, he’d found a popular burger spot down the street from his new job and with a love for burgers and fries he began to frequently visit that particular spot and was getting the biggest burger they had to offer as often as twice a week. A drastic change was noticed and he wasn't feeling it at all.

The month was December and the year was 2012, after looking at his self in the mirror from the side and being very disgusted by what he saw, he knew a change was needed.  The next day he signed up for a gym membership and started with cardio at a nearby football stadium. And the rest is history.

RHBC Fitness quickly took a spin of its own, starting as just a hash tag for the pictures he’d post after working out on social media, it kind of stuck with the owner and rapidly went viral by his friends and network who starting asking him about RHBC Fitness and how they could get down!  Inspired by the quick progress he started to see from his work outs and the comments he received on the shape his body was taking made him want to help others who needed a little motivation to get start with living a healthy lifestyle.

While he has a strong drive and dedication for a healthier lifestyle for personal reasons he also wants RHBC Fitness to provide result proven workouts and health and wellness product incorporation to his clients to assure them the lifestyle or health and wellness change they wish to see.Passionate to help other reach their fitness goals. RHBC Fitness has expansion goals that range from solid clientele and more staff to nationwide fitness centers.

Terrell Harris and RHBC Fitness are well on their way to empowering others and changing lives.